Few can have missed the announcements this year by the oil giants that they are moving away from an ‘oil and gas model’ towards that of a “diversified” energy company. Royal Dutch Shell has announced new investment in wind power and green hydrogen production. Total is to focus on solar energy in Spain and wind farms in Scotland. Perhaps most strikingly of all, BP has revealed it will be investingUSD 5 billion annually on low-carbon technologies while also setting a target to reduce its overall oil and gas production by 40% by 2030.

Given the mood music, a steady decline in oil and gas demand is inevitable.Renewables such as solar and wind power could rise from 5% of global energy supply today to 25% in 2035, and nearly 50% by 2050.

For a long time, investment in clean energy technologies (USD 600 billion per year)has been stuck at around one-third of total energy investment in recent years. However, in 2020 it is estimated that this will finally increase to close to40%, although a large part of that is due to falling investments in fossil fuels.

We can expect this trend to continue. Recent government commitments have raised hopes for higher public and private investments in clean technology, the EU has already earmarked 30% of its USD 880 billion Covid-19 recovery plan for climate measures. However, a poorly managed energy transition could temporarily offset the gains or prolong the phasing out of fossil fuel reserves.

As trade tensions between China and the US continue to simmer, China’s strategic dominance of the supply chain in renewable resources is noteworthy. Chinese firms produce 72% of the world’s solar modules, 69% of its lithium-ion batteries and 45% of its wind turbines.They also control much of the refining of minerals critical to clean energy, such as cobalt and lithium and produce 60% of the world’s “rare earths” which play a critical role in renewable tech.

Whether China’s dominance – and Western dependency – in renewable resources will remain is unclear. European states are, for example, already moving to develop their own mining and refining supply chains independent of China. How successful those efforts are will be of geostrategic importance in the coming years. In any case, it seems likely that in the future we will no longer talk about Petro-states and Petro-dollars, but rather Electro-states, and maybe even Electro-euros. 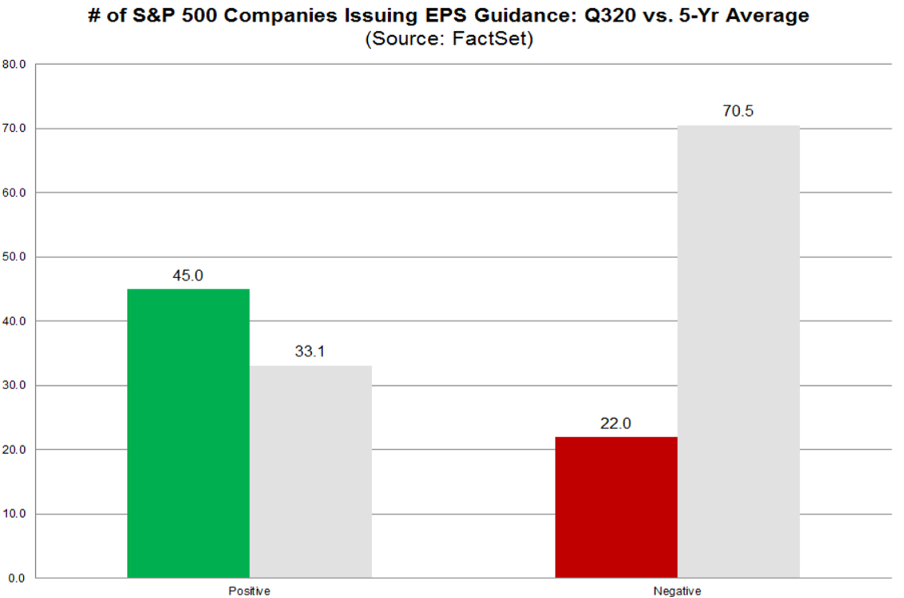 To date only 67 companies on the S&P 500 have released their quarterly Earnings per Share (EPS) guidance for the third financial quarter of 2020. This is the second lowest number of companies to issue guidance in the last ten years, but nevertheless provides a useful snapshot of the overall condition of the S&P500.

Despite the low number of the companies issuing guidance the majority, 45, have issued positive earnings per share guidance for the third quarter, with 26% higher than what they issued in the previous quarter. By contrast only 22 of the 67issued negative guidance, which is 68% lower than the five-year average. Of the companies that issued positive guidance in this quarter so far, there is also a clear trend with all 45 companies operating in the IT, Healthcare, andIndustrials sectors. This paints an overall tentatively positive view of theS&P, reflecting the gradual improvement of companies in these sectors as they recover from the impact of COVID-19 and the effects of national lockdowns.

Economic recovery uneven in US and EU

After early signs of an economic recovery in the US, continued improvements look doubtful with the latest signs from the leisure and hospitality sectors. Eyes now turn to the 2.2trn USD relief bill proposed by House Democrats, which will face difficult negotiations in the Republican-controlled Senate if it is to pass into law. Positive news for the US however can be found in growing consumer confidence, a drop in unemployment, and a rise in exports. Meanwhile, in the Eurozone, the latest manufacturing figures suggest the recovery is stalling, with a decline in services, but German manufacturing continues to post strong results.

Japan’s industrial production levels climbed for the third month in a row in August, growing +1.7%. The increase was primarily due to improved car and electronics output. This was combined with a healthy growth of 4.6% in retail sales, which exceeded many analysts’ forecast of 2%. Retail growth is likely due primarily to the discount campaign introduced by theJapanese government to boost tourism.