The well-documented V-shaped recovery in China, outperforming the West and all other G20 nations, has helped to drive a manufacturing revival in Europe. After China’s lifting of supply restrictions during the summer months, European producers now have a backlog of orders to meet. The pent-up demand is expected to help sustain manufacturing activity for several months to come.

The European car industry, meanwhile, finds itself a major beneficiary of strong demand fueled by subsidies for electric and hybrid vehicles in Germany and France, and in China. Companies with strong online and wholesale channels are also feeling an uptick in domestic demand across Europe.

But with Covid infections rising across Europe, the potential of a second lockdown could spell bad news for many businesses that have so far weathered the pandemic’s stormy waters. 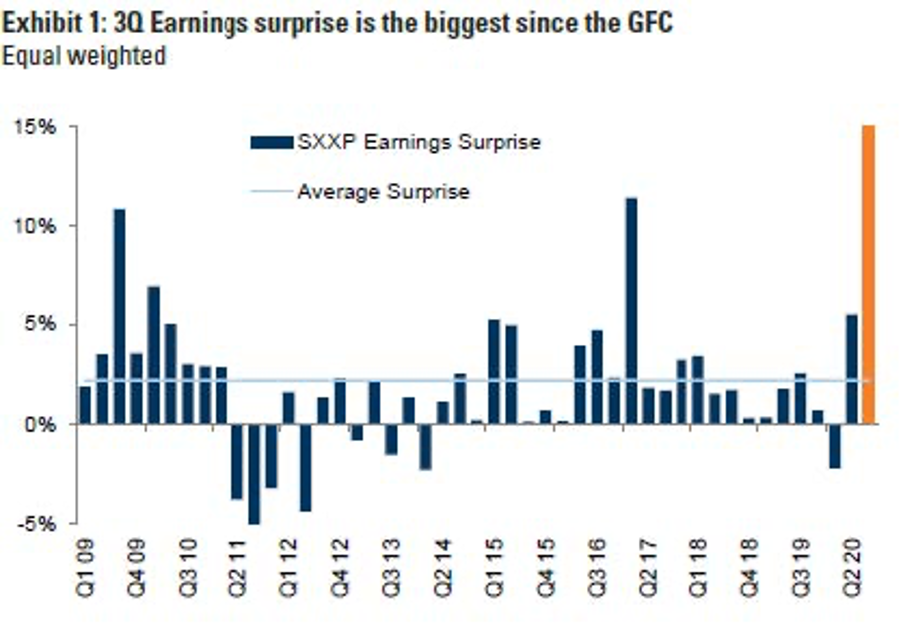 The 3rd quarter earnings season is in full flow, with around a fifth of companies having reported their results. The emerging set of data indicates a strong increase in companies announcing better than expected results. Earnings surprises for Q3 are +15% on the upside – the largest uptick since the Global Financial Crisis – following a 6% upside surprise in the 2nd quarter of this year. Two common themes explain the autumn earnings surprises: First, there has certainly been an underestimation of the growth potential of European stocks. Second, China’s strong recovery from the pandemic’s economic impact is benefitting companies with a high sales exposure to the country. After European company earnings were hit hard during the first half of the year, stronger than expected Q3 results should give positive momentum moving into Q4 and beyond.

China’s recovery firing on all cylinders

China’s V-shaped recovery is almost complete, with 3rd quarter GDP growth of 4.9% (up from 3.3% in Q2) bringing the economic output back close to pre-pandemic levels. Industrial production remains very strong, recording the best performance of the year so far in September and marking the 6th consecutive month of expansion. The industrial boom is fueling imports, which is benefitting companies with strong sales exposure to the Chinese economy. Importantly, China’s recovery is picking up across the board, with retail sales – previously a concern in the domestic economy – benefitting from the effects of stimulus measures.

US consumer confidence dipped slightly in October, reflecting the impact of relatively soft equity markets and an uptick in coronavirus infections. There is anticipation, nonetheless, that the retail sector will benefit from consumers loosening their purse strings in the run-up to Christmas, after months of savings during the pandemic. Parcel delivery service, DHL, is looking to hire an extra 10,000 staff to manage a surge in people ordering goods during holiday season. The leisure and hospitality sectors are, however, likely to remain hampered for months to come.