If you needed any reminder of why India is an essential player in the global fight against climate change, this week’s IEA India Energy Outlook 2021 delivered one in stark terms. According to the report, over the next two decades, India will account for a quarter of the world’s increase in energy demand, overtaking the EU as the world’s third largest energy consumer by 2030.

India’s energy use has doubled since 2000, with oil and coal servicing most of that demand. Ensuring India’s next wave of growth in energy demand is met with renewable sources will be a key challenge for today’s and future Indian policymakers.

The IEA’s prediction that solar will be equal to coal in India’s energy mix by 2040 brings some encouragement and would signal a stunning turnaround. At present, solar accounts for just 4% of India’s electricity generation, compared with around 70% for coal. Solar energy’s cost-competitiveness and rapid advances in battery storage technology – alongside India’s ambitious policy goals – are key drivers of the IEA’s forecast.

The Indian government, however, is not putting all its power-generating eggs in one basket. Plans to set up a National Hydrogen Energy Mission to develop green hydrogen were announced as part of last month’s Union Budget. As India finds itself at the heart of growth in global energy demand, Indian policymakers are angling to make the country a hub for manufacturing clean energy technologies across the value chain – including, it would seem, hydrogen and fuel cell technologies. 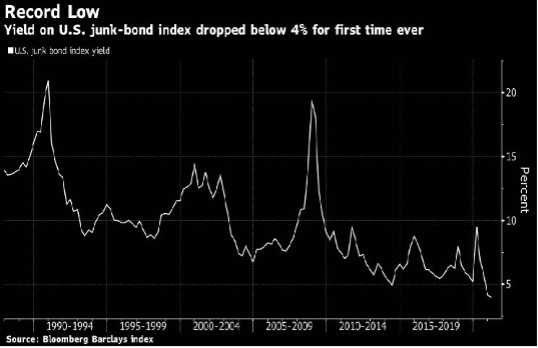 In this week’s chart, we see how yield-hungry investors have been piling into the riskiest segment of the fixed income spectrum. The yield on junk-bond index has reach edits lowest ever point, dipping below 4% for the first time, and the spread is plumbing new depths at 280 basis points (compared with an average of 450 basis points over the past 5 years). What’s behind investors’ junk diet? Well, the back-up in the less risky part of the market, US treasuries, appears to be pushing investors – seemingly unfazed by the potential prospect of defaults later in the year – towards the high yield market. Clearly the glut of corporate bond issuance generated by the pandemic’s economic impact is finding ample demand, with even CCC-rated bonds – the lowest of the issuance spectrum – heavily oversubscribed.

Japan’s GDP figures for the 4th quarter of 2020 will be released on Sunday, with forecasts predicting a 1.6% slump – a sharp reversal after strong quarter-on-quarter growth in Q3. The expected contraction will essentially have been driven by a slowdown in private consumption. After averting the worst of the pandemic during the first wave, Japan has been forced to introduce more restrictive measures in recent months to cope with a winter uptick in infections. The corresponding effect on retail sales and private consumption looks likely to have undermined the country’s economic recovery in Q4.

January’s US labour market figures disappointed expectations, with a mere 49,000 new jobs created – below the consensus of 105,000. To compound matters, December’s already weak data was revised down by a sizable 159,000. Don’t be fooled by a drop in the unemployment rate to 6.3% from 6.7%, which only reflects a fall in the participation rate due to 405,000 US workers leaving the labour market altogether. With overall payrolls still languishing 10m lower than pre-Covid levels, the job market does not paint a pretty picture for economic growth moving forward. A significant crumb of comfort for policymakers, however, is the pent-up demand due to the huge savings amassed by US households and historically low levels of household indebtedness, which could unleash a wave of activity in the suffering service sector.