The private market has been dominated recently by a spate of record valuations and SPACs. A much-anticipated deal closed for Lucid Motors, as the electric carmaker – led by former Tesla chief engineer Peter Rawlinson – agreed to go public at an implied $24 billion valuation via reverse merger with Churchill Capital, a SPAC led by Michael Klein. The deal, which included a $2.5 billion PIPE anchored by Saudi Arabia's Public Investment Fund, is the largest SPAC merger ever.

Another high-profile merger is the deal by which Joby Aviation, a developer of electric flying vehicles valued at $6.6 billion, will be bought by Reinvent Technology Partners, a SPAC led by Hoffmanand Zynga founder Mark Pincus; the deal includes an $835 million PIPE and additional investment from Uber. As our chart highlights, the recent SPAC trend shows no signs of slowing down soon – with 50 deals announced in February alone. Expect London, Amsterdam and Frankfurt to make moves to get in on the SPAC fashion.

Major IPOs are also making the headlines. Oscar, a New York-based, technology-focused health insurance company, which increased its IPO price range to $36-$38, plans to list on the New York Stock Exchange this week. Oatly, the Swedish oat milk company backed by Blackstone, Oprah and Jay Z, filed confidential IPO papers, while the cryptocurrency exchange Coinbase has filed to go public via a $1 billion direct listing – raising the possibility of America’s highest initial valuation of a tech company since Facebook. 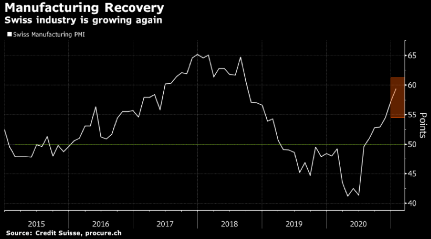 This week’s chart highlights the recovery of the Swiss economy, driven in large part by manufacturing, which expanded by 0.3% during the fourth quarter of 2020 – an improvement on the previous estimate of a stall (0%). This growth takes the year-on-year figure to -2.9%. While this represents the biggest decline since the 1970s, it is nevertheless a much better figure than those posted in neighbouring countries. In Switzerland, the pandemic’s second wave has had less of an impact than the beginning of the crisis. The Swiss economy is expected to return to its pre-pandemic level in 2022, according to the Swiss National Bank (SNB).

With many container ships still stuck in harbours around the world, supply-chain bottlenecks have made it relatively difficult to ship goods out of China to Europe and the Americas – a trend observed since November. Though data have been affected by the Lunar New Year break, we see signs of a dip in manufacturing, as the February Purchasing Managers' Index (PMI) fell to 50.5 from 51.3 the previous month. Export orders are a bright spot, however, which encouragingly picked up 18.1%, from January’s 9.7%.

US hospitality sector points to early drivers of recovery

An uptick in real-time data on services reveals positive early signs for economic recovery from the pandemic – particularly in hospitality sectors. In certain US states, restaurants and hotels are reopening, and airline passenger numbers are slightly creeping up, contributing to the rehiring of staff and a rise in small business payrolls. Added to manufacturing, which has been holding up quite well, this could represent a more broad-based recovery.