If it wasn’t already clear to investors, developments in 2021 are showing that decarbonisation and the global energy transition will be the defining megatrend of the 21st century.

Countries across the world are committing to necessarily ambitious decarbonisation goals that will have a profound impact on the global economy. From China’s carbon neutrality target for 2060, to the 27 EU members’ pledge to cut their net greenhouse gas emissions from 1990 levels by 55% by 2030, and India’s efforts to reduce carbon emissions by over a third by 2030, the world’s major powers are making concerted efforts to ensure the sustainability of their major industries.

The US has now rejoined this trend with the election of the Biden-Harris administration. While it has yet to announce any major climate legislation, it has already reversed the previous administration’s stance, re-entering theParis Agreement and setting targets for fossil fuel-free electricity generation(2035) and net-zero emissions (2050).

As governments’ approaches to climate have changed, so has the capacity of generation technology required for a global energy transition. Between 2009 and 2019 the price of onshore wind and solar electricity declined by 70% and 89%respectively, while between 2014 and 2019 global renewable capacity grew by more than 50%. This pace is reflected in last year’s statistics around newly installed capacity, which was dominated by renewables, making up almost 90%. A similar sign can be seen in the rise of electric vehicles. Over the last year, 20% of all new car sales in China were electric, and in some countries, like Norway, the figure was over 50%.

S.P. Hinduja Banque Privée’s investment process has worked to adapt to this transformation, carefully integrating ESG considerations into products and developing thematic portfolios with a particular focus on climate action. With the US expected to step up its actions, this mega-trend will only get bigger with time, and as such investors need to be alive to the developments and changes that it will bring. 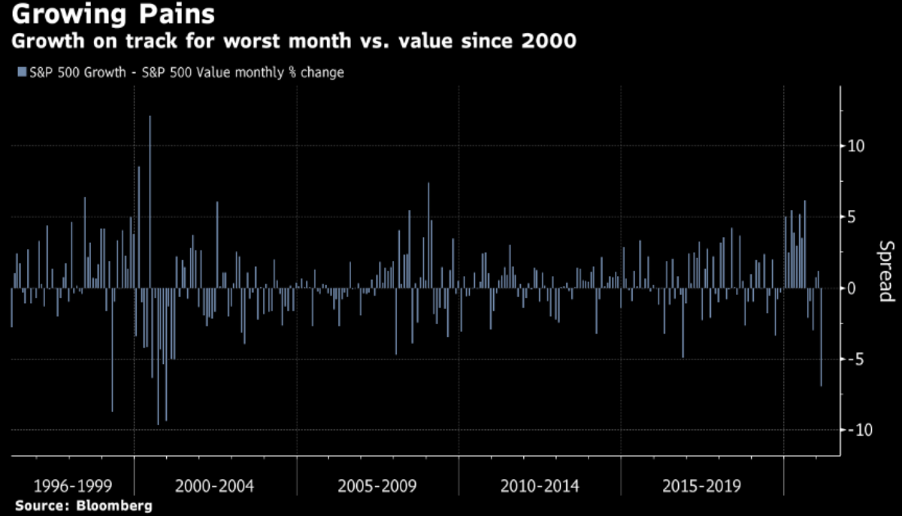 While there have been mixed developments for global markets over the past month, this week’s chart from Bloomberg shows that growth stocks have clearly suffered in 2021, with the S&P 500 registering their worst month against value in more than two decades. This is on the back of real yields, which are pushing up 10-year and 30-year bond yields, as a result of which the yield curve has deepened. Bond yields have risen sharply, reaching a new one-year-high, while the yield curve spread between 5-year and 30-year US Treasury yields has pushed to the highest levels in 6 years.

Despite some positive signs, a full economic recovery for India is still some way off, with the latest GDP figures for the fourth quarter of 2020 marking a 1.8% decline in expected growth from the -7.5% registered in the previous quarter. In other areas, the wholesale price index was up by 2% month on month, after registering 1.2% in December. The base effect is likely to hit inflation later in the year, but no one currently expects the Reserve Bank of India to change its current policy.

When US Federal Reserve Chairman Jerome Powell addressed the Senate Banking Committee, commentators looked for a sign of a change in direction, but he provided no new information. With more than ten million people unemployed, and a persistent weakness in the leisure and hospitality industries, the US economy continues to face significant challenges. The Fed, however, is likely to remain patient and supportive, and has been clear that it expects the economy to recover in 2021, with GDP growing +6% this year. Powell showed no concern regarding inflation, and believes the potential spike to be temporary, with the longer-term trend of low inflation expected to continue. Elevated levels of household savings will likely be boosted further by the arrival of the next fiscal relief bill, which has the potential to unleash a wave of private consumption later in the year, most likely in services, in addition to affecting cars and housing-related items.