Global unemployment is worse than expected, according to the International Labour Organization, which estimated that the equivalent of 400 million full-time jobs were lost in the first half of 2020 — a far worse result than the previously predicted 305 million. The second-half outlook is somewhat encouraging, with the number of jobless people worldwide expected to improve to 140 million as manufacturing picks up. Bond yields are steady, while the safe havens of the U.S. dollar and gold are on the rise.

The U.S. markets have been softer on concerns of a second wave of COVID-19 infections, though continually buoyed by the performance of the technology sector. Older and more established tech companies like Microsoft have, somewhat counterintuitively, held up better as the pandemic has unfolded. The business-to-business focus feeds a continual stream of legacy clients — companies like Citrix, Splunk and Apple benefit from the growth of cloud computing and infrastructure — while newer tech companies targeting consumers have an uphill battle to gain traction in the current economy. 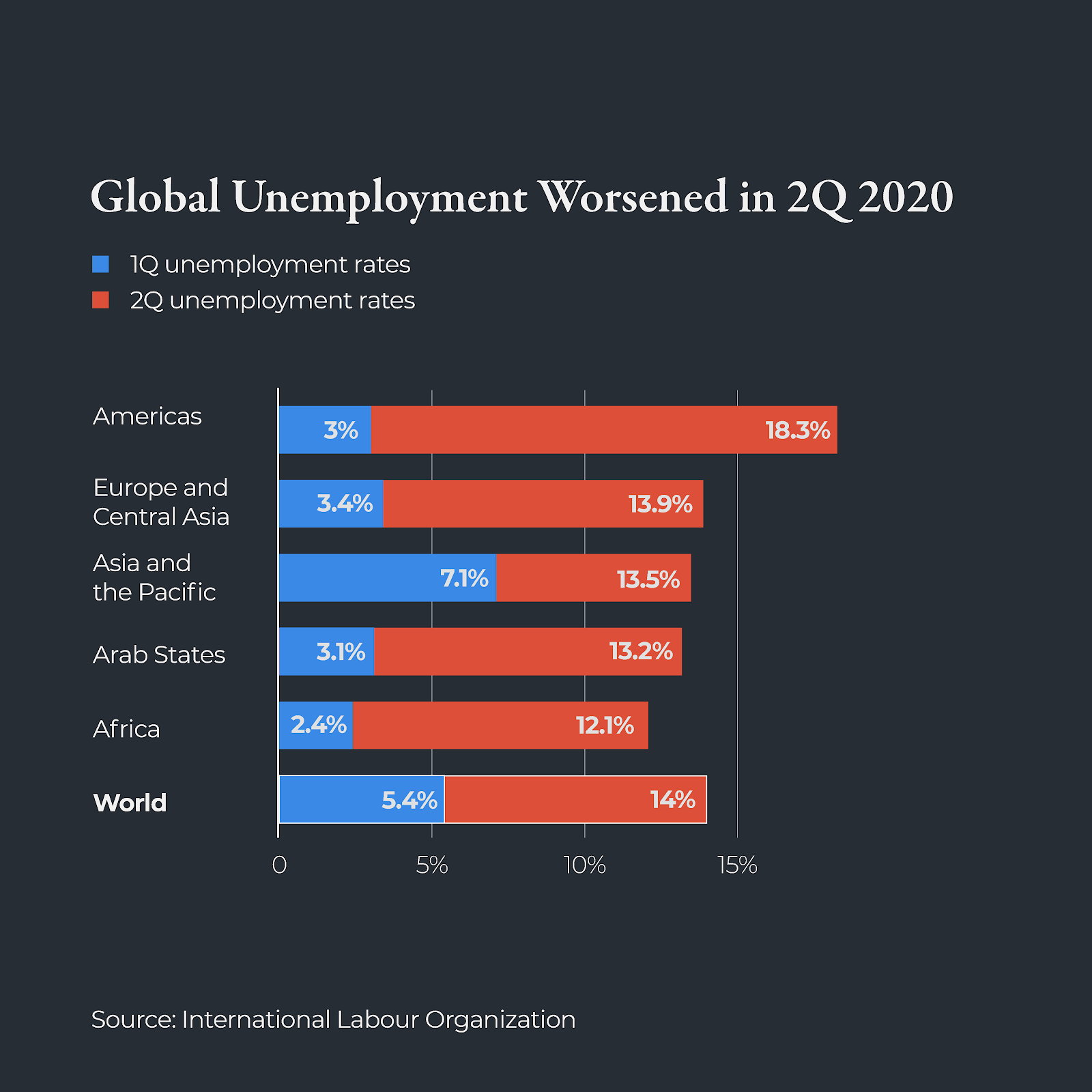 The job losses resulting from the coronavirus pandemic did not spare any country; data from the International Labour Organisation shows the global spread of the virus from 1Q to 2Q, ending on pronounced job losses in the Americas. Women, who are more likely to be frontline workers and to have caregiving responsibilities, are disproportionately impacted across the globe.

India 2Q
India’s surprise first-quarter current account surplus of $0.6 billion — equivalent to 0.1% of its GDP — continued a steady narrowing of the deficit over the past 12 months, reflective of weaker exports and lower domestic demand. While it’s likely there will be a current account surplus in the second quarter, the country’s GDP is still expected to be negative for the year. The only question is by how much. India’s economy has a long way to go on the road to recovery, with the potential for a new pandemic lockdown and concerns over the border conflict with China (and its relatively speedy recovery) having detrimental impacts.

Monetary supply decisions made by Europe’s central banks early in the pandemic appear to be paying off. May’s +8.9% year-over-year market liquidity, compared to +8.2% in April and +5% before COVID-19, indicates improved conditions for a sustained recovery. Avoiding a depression meant early and robust help for furloughed employees; such actions across Europe were comparatively far-reaching and kicked in earlier than in other regions. In France, for instance, more money in deposits and in circulation led to increased economic activity once lockdowns were lifted. A V-shaped recovery is still unlikely, but prospects are looking up.