In a world of uncertainty caused by Covid-19 and its economic shockwaves, add one more variable of global consequence into the mix: a US presidential election on November 3.

In a campaign overshadowed by the pandemic, Biden and Trump’s race to the White House is now entering its final stretch and the spotlight is firmly on the two candidates’ competing plans for the next four years. There are important areas of divergence and some surprising areas of alignment to note.

Most pertinent to investors is what a Biden presidency will look like. The Trump agenda of tax cuts and regulatory rollbacks, laid out over the past four years, is firmly established. The President’s relaxed attitude to deficits in his first term is unlikely to change in a second term. Yet the pandemic has generated a gaping hole in the Treasury’s finances, which we can expect Biden to look to fill by raising taxation.

Taxes are undoubtedly Biden’s most market sensitive policy area, where he will seek to repeal much of Trump’s 2017 Tax Cuts and Jobs Act, which ballooned the US deficit. Biden’s pledge to lift the corporation tax rate – scaled down to 21% from 35% under Trump – back up to 28% could impact upon the market as a whole, as could other tax rises on capital gains and dividend payments. Sectors that have benefitted most from major tax cuts under Trump like consumer discretionary, financials, telecommunications and energy will be most impacted.

For ESG investors, a Biden presidency will paint a rosier picture. Trump has rolled back Obama-era environmental regulations, pulled the United States out of the Paris Agreement and doubled down on fossil fuels. Biden on the other hand, heavily emphasizes clean energies and has committed to net-zero emissions by 2050. His major $1.3trn infrastructure plan has a marked sustainability focus that will pique the interest of ESG investors: rail, the electric grid, 5G infrastructure, EV transition will all benefit. On the other hand, few are holding their breath that President Trump’s own trillion-dollar infrastructure promise made in 2016 will come good this time round.

A peak of volatility, already evident in future markets, is expected around mid-October. With increased mail-in voting now making a definitive result on election night appears unlikely, investors will be hoping for a swift resolution. 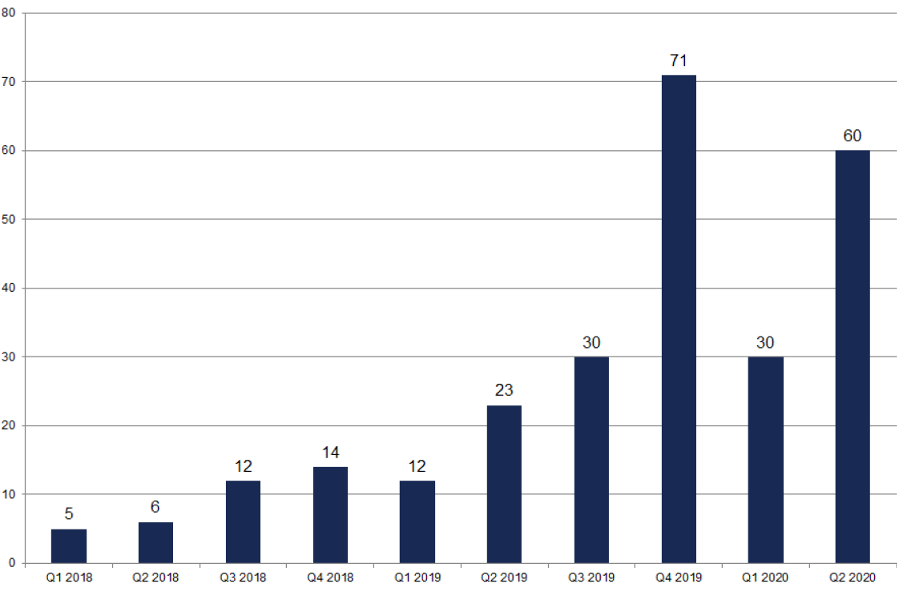 The number of S&P 500 companies citing the term ‘ESG’ during Q2 earnings calls rose sharply this quarter – 60 is the second highest score in the past 4 years and a 100% increase quarter-on-quarter. That’s still just 12% of index companies, but 144 other companies who did not directly cite ‘ESG’ did raise racial justice and other social-related issues during their quarterly updates.

Led unsurprisingly by the energy sector, US companies are racing to close the gap with Europe on ESG uptake and appeal to investors who are increasingly rewarding companies actively engaged in implementing ESG strategies. Financial markets’ and regulators’ awareness of the importance of ESG factors in combatting systematic financial risk could soar after the 2020 elections, particularly with a Biden win.

The ECB opted not to make any change to its monetary policy last week, despite growing concerns over the recent strength of the Euro and wider disinflationary pressures resulting from the continent’s weak recovery. The ECB is continuing to pursue its €1.35trn bond-buying programme, in the hope that existing measures will stave off a drawn-out economic depression. With Covid-19 infections trending upwards across the continent, however, recent mobility data showing more people staying at home could imperil the Eurozone’s delicate recovery during Q3.

Consumer spending in China has joined the recovery in industrial production by returning to normal levels, with a month-on-month growth of 0.5% recorded in August – the first increase seen in 2020. Looser travel restrictions and job market improvement have helped to encourage Chinese citizens back to the shops, reflected in a 11.6% increase in car sales. Industrial production meanwhile rose 5.5%, the fifth consecutive rise year-on-year. China was the only major global economy to record positive GDP growth in Q2, having also experienced a relatively less severe 6.8% contraction in Q1.