In. an extraordinary week, which saw President Donald Trump test positive forCovid-19 and require hospitalisation for treatment, there are further signs that the health of the US economy looks equally uncertain.

Amid heightened election fever and news of the President’s own viral symptoms, last week’s labour market report painted a gloomy picture for the US recovery. Employment growth continued to lose momentum, with overall levels of employment still languishing roughly 10 million below pre-pandemic levels.

Particularly concerning in the figures is the spike in long-term unemployment (those unemployed for a period exceeding 27 weeks) – an upward trend that will have negative consequences for the longer-term prospects of the recovery. Those suffering long-term unemployment tend to lose skills, finding it more difficult tore-enter the labour market and also damaging productivity gains that help to drive GDP growth.

Capital expenditures, meanwhile, remain slow. While not a phenomenon confined to the US, it is one that’s particularly pronounced stateside. Levels of indebtedness over the past decade since the last financial crisis have not helped, with much expenditure in that period going into dividend payments and share buy-backs rather than building capacity. Combined with the longstanding issue of America’s aging infrastructure, the prospects of a strong rebound in the medium to long-term are receding.

To add fuel to the fire, Jay Powell’s renewed call this week for more fiscal measures to support the Fed’s monetary policy appear to have fallen on deaf ears in the White House. In a series of tweets, President Trump threatened to pull the plug on negotiations for a bipartisan stimulus package before the election. With political deadlock continuing, the prospects of an agreement to help lift theUS economy out of its pandemic malaise are receding. The pace of the US recovery looks set to lag further. 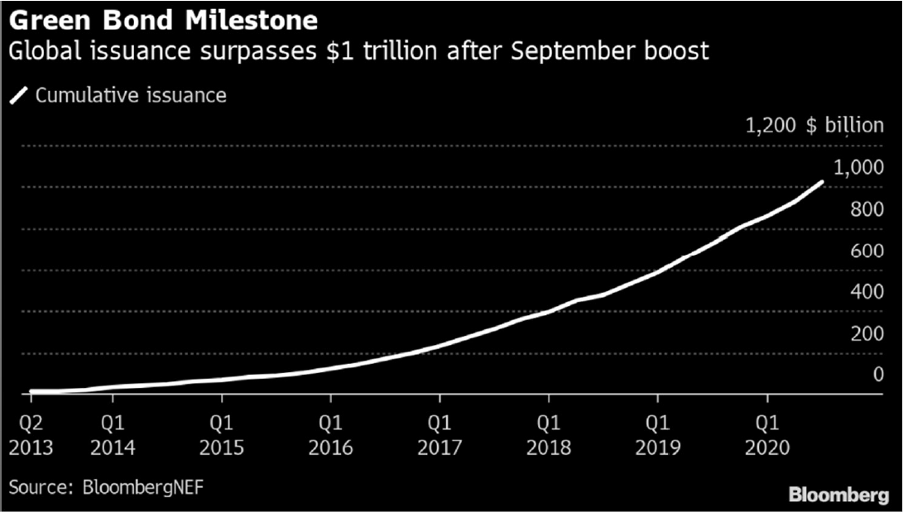 The development of global green bond issuance has been rapid, recently breaking the$1trn mark. While that’s still only a drop in the ocean of the global $128trn bond market, the progress is encouraging. 2020 is rightly being seen as an inflection point in the integration of ESG factors into investments and corporate processes. The ESG boom is reflected in green bond issuances, which have accelerated since the beginning of this year. $50bn worth of green bonds were issued in September of this year alone – the highest on record. The broad array of issuers that are active in this sector also sends a positive signal for future development.

Recent manufacturing numbers out of China for September have confirmed what we already know: China is recovering much faster and more strongly than the rest of the world. Remarkably, China’s exports have now returned to positive territory for the first time this year – good news for China and also for other economies depending on a V-shaped recovery for the world's second largest economy. Looking ahead to GDP figures for the year, the data bodes well for the prospect of China erasing most, if not all, of its losses since the start of the pandemic.

Divergent recoveries between North and South are throwing long-standing divisions within the Eurozone into relief.  As lockdown measures continue to stifle growth across the continent, Germany’s manufacturing base makes it essentially the only Eurozone economy to record positive growth. Economies that are more reliant on tourism and hospitality sectors, such as Italy and Spain, have been hit harder. Excluding house prices, which are holding up well, inflationary pressures are nowhere to be seen – more concern for decision-makers at the ECB in the months ahead.