With so much uncertainty caused by COVID-19 and the economic downturn that followed, stability is now a sought-after virtue for investors.

Throw in the weakness of the U.S. dollar and the unpredictability of U.S.-Chinese trade relations and the risk-averse are searching for new opportunities. Emerging markets, though still attractive for longer-term investments, have rebounded from the virus faster than developed nations and are relatively expensive considering the potential risks.

For all those reasons, European investments are attracting a lot of attention, especially those in Switzerland.

The country has relatively strong macro fundamentals, including the lowest debt-to-GDP ratio among developed countries, at 32%, and the highest per capita spending on research and development in the world. Its economy has been more resilient than other major economies and has a strong job market that encourages private consumption.

In part, that’s due to its reliance on the pharmaceutical sector, with Novartis and Roche based there, and biotech from Lonza. The country also produces consumer staples from Nestle, computer accessories manufacturer Logitech, and is a financial services hub.

Because Switzerland isn’t as dependent on tourism as its neighbors, it has been affected less by the downturn and should fare better in the near term than others in the Eurozone because international air travel will likely take longer to return than previously expected. Swiss officials say the country is already on the road to recovery and expect the country’s GDP to be positive in the third quarter. 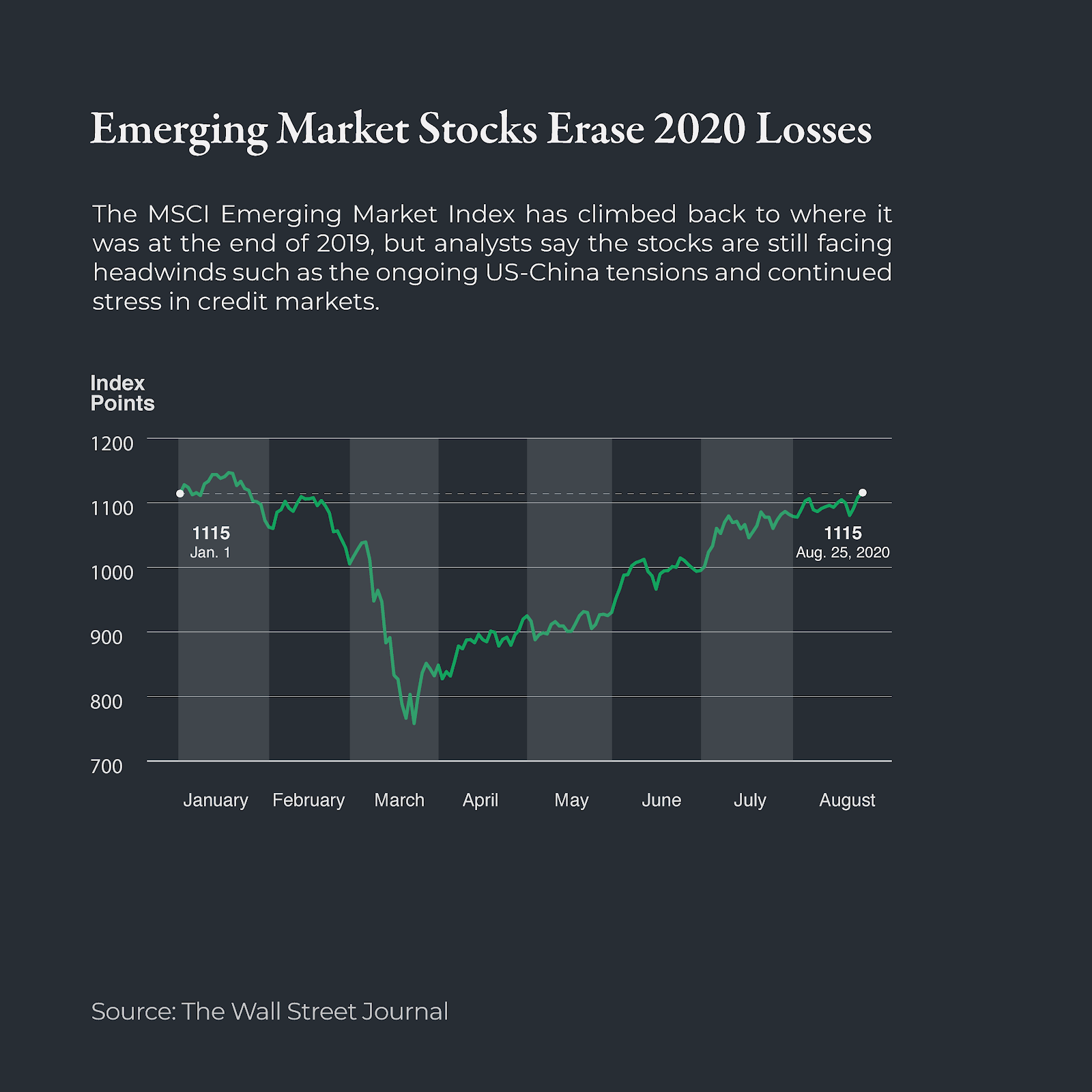 Stock prices in emerging markets are at pre-pandemic levels again, recovering nearly all of the 34% in value they lost in March, according to the MSCI Emerging Market Index. Aided by the weak U.S. dollar and a faster rebound from the coronavirus than in developed markets, valuations for emerging market stocks are now trading at 33% above their 10-year average, making them relatively expensive considering the potential effect of U.S.-China trade tensions and other market stresses.

Unemployment hasn’t returned to the 23% peaks of April and May, but it has started climbing again in August, up to 9.1%. However, the government’s decision to relax eligibility requirements for unemployment benefit payments, offering half of a worker’s salary for three months, has helped 4 million industrial workers. A government program that employs rural workers for 100 days has helped cut the unemployment rate in rural India to 6.3%, the lowest rate since February.

Consumer confidence dropped to 84.8 in July, its lowest level since 2016. Worried about the resurgence of COVID-19 cases in some areas and the expiration of extra benefits for the unemployed in July, fewer Americans were planning to buy cars or homes and the number of people expecting their income to drop climbed to 16.6%. Though the housing market is currently doing well, mainly because of low mortgage rates, the high sales rate isn’t sustainable without a broader recovery.