We take a special deep market dive into China this week.

China is a market like no other. Policy plays an important role in implementing its government’s goals, perhaps more than any other major global power. This was in evidence earlier this year when the country’s 14th Five Year Plan was ratified in March signaling the start of a new round of far-reaching reforms across multiple industries. The Plan reaffirms the government’s long-term commitment to their development.

The slate of policies are closely tied to the government’s Common Prosperity Strategy, which is built on 4 pillars: healthcare, livelihood, education, housing, all designed to reduce the widening wealth gap. There are significant challenges facing the Chinese middle class – from property prices, to steep healthcare & education costs – which present barriers to social mobility and have become a major focusing policy drive for the government.

The most recent regulatory measures were aimed at creating more equitable growth, partly by shifting tech progress from internet and e-commerce to manufacturing.

The country’s first set of major Healthcare Reforms began in 2009. Measures included the introduction of basic medical insurance covering c. 99% of China’s population, the establishment of a central procurement programme leading to drug cost reduction, the acceleration of R&D spend and creation of innovative biotechnology industry, and the promotion of telemedicine, improving access and reducing wait time from 3 hours to 8 minutes. All of these efforts have contributed to the growth of Chinese companies allowing them to become more competitive globally.

Similar measures in education include reforms, which worked towards improving equal opportunities in light of challenging demographics. The nation-wide Gaokao university entry exam created a huge private tutoring industry, which is now worth some USD 100bn in annual sales. Up to 20% of households’ budgets are now used for private tutoring, generating unaffordable demands on many families’ purse strings. Furthermore, the Government loosened its one-child policy recently, adding to further household stress.

Environmental and industrial reforms are another key area of focus for policymakers.

Beijing joined the other major powers by signing the Paris Climate Agreement in 2017, committing to carbon neutrality by 2060. The country has significantly invested in renewables, which now contribute to 25% of its total energy production, helping to reduce the country’s carbon intensity by 65% by 2030 versus 2005 level. Total solar and wind capacity is now set to reach 1,200 GW by 2030. These ambitious climate pledges have also contributed to increased R&D.

The government’s industrial reform has tended to focus on high-tech industries, such as 5G technology and semiconductor production. The 5G national strategic priority saw the country begin setting-up of multiple public-private partnerships to fund 5m 5G base stations for 2025. Meanwhile China has become the world’s largest consumer of semiconductors – achieving self-sufficiency is therefore a key strategic objective for the government.

Finally, capital market reforms have redirected investments and savings to the stock market. Real estate investments now account for close to 60% of Chinese household savings (vs 33% in US). New regulation was introduced to incentivise investments in financial markets, while asset management firms have welcomed foreign capital. Chinese capital markets’ role on the world stage is expected to rise substantially. Currently, Chinese A-shares make up 5.2% of global equity index with an A-share market capitalisation of more than 11% of World total but China’s share of World GDP is more than 16%. For this reason, alongside many others, economists expect portfolio allocation to Chinese equities to rise significantly.

Despite facing a range of short-term uncertainties, China’s policy reforms will likely benefit major industries in the long-term. There will likely be tailwinds for the A-share market, especially in sectors such as healthcare, clean technology, high-tech and banking. But China’s capital market size looks set to finally become reflective of its economic contribution to World GDP. 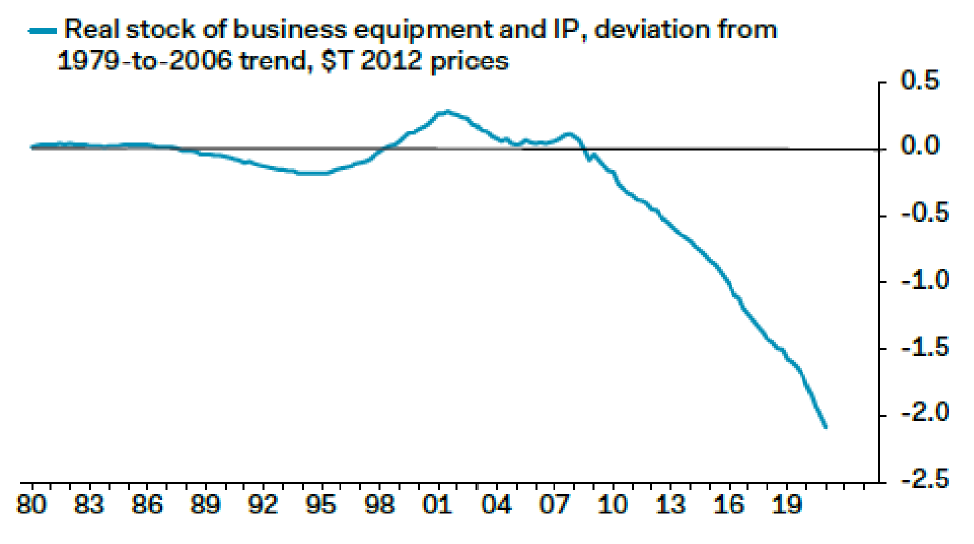 This week’s chart highlights how over the past ten years US capital stock have dropped to -$2tn below the 1979-2006 trend. This decline has fueled corporates’ present intentions to spend more on equipment, infrastructure, and intellectual property. The past twelve months has already seen some evidence with capital expenditure rising by c. 20% from pre-Covid levels. Planned spending has been spurred by record cash piles, with around 14% of US GDP was hoarded during the pandemic. Increased capex is likely to boost productivity growth, which in turn will limit inflationary pressure, even if wage growth is set to keep climbing.

In August, China’s services PMI dropped to 47.5 from 52.5 in July, its weakest figure since February 2020, highlighting the impact of the government’s Zero-Covid policy. Manufacturing PMI also slipped, from 50.4 in July to 50.1 in August. Softness in commodity prices has also start feeding through to PPI inflation, standing at 9.1% in August from 0% in July YoY.

This year’s FOMC Annual Jackson Hole Symposium has broadly signaled a “dovish” tapering path for the US economy. Economists are still waiting for more evidence of sustainable labour market improvements, and continue to see inflationary pressures driven by Covid-related factors. But with Q2 stimulus boost fading and the Delta variant continuing to hit private consumption, especially in the Southern States, Q3 GDP prospects are set to deteriorate. Meanwhile, rising business capex and a rebound in inventory support growth, highlight uncertainty around how these built up savings will be used.