At the meeting, the Committee discussed measures to address the country’s major economic concerns, including trade frictions, an aging population, and climate change, with the broader strategy emphasizing a greater degree of self-reliance. The meeting’s focus was on the push to develop the country’s technology sector and build a robust domestic market, while acknowledging foreign issues.

The Committee proposed wide-ranging policies designed to support private consumption and manufacturing, which is likely to benefit companies across a range of sectors.

For the tech sector, a surge in spending is likely to address the country’s investment in cloud technology, which lags behind the global average. Cloud giants Alibaba, Tencent, as well as software company Kingdee, and Youyou may well be among the direct beneficiaries.

In terms of infrastructure, China’s urban rail sector is expected to see further spending, with the country’s network set to expand 20%-25% over the plan’s five-year period, improving construction orders across the country.

Climate Change remains a major priority for the Chinese government which will benefit the Renewable Energy sector. The plan outlines a reduction in emissions, reducing oil imports, increasing solar and wind capacity, and puts forward an ambition proposal for the sale of new energy vehicles.

Finally, the Committee proposed a number of measures to increase self-reliance and improve its domestic market, suggesting the country will reform the process around the granting of resident permits to promote urban redevelopment and talent mobility, and work to reduce jobless rates to boost consumer sentiment and retail sales.

While the plan will likely not become official until March of next year, it is unlikely to change, and therefore gives a strong indication of the country’s economic direction. 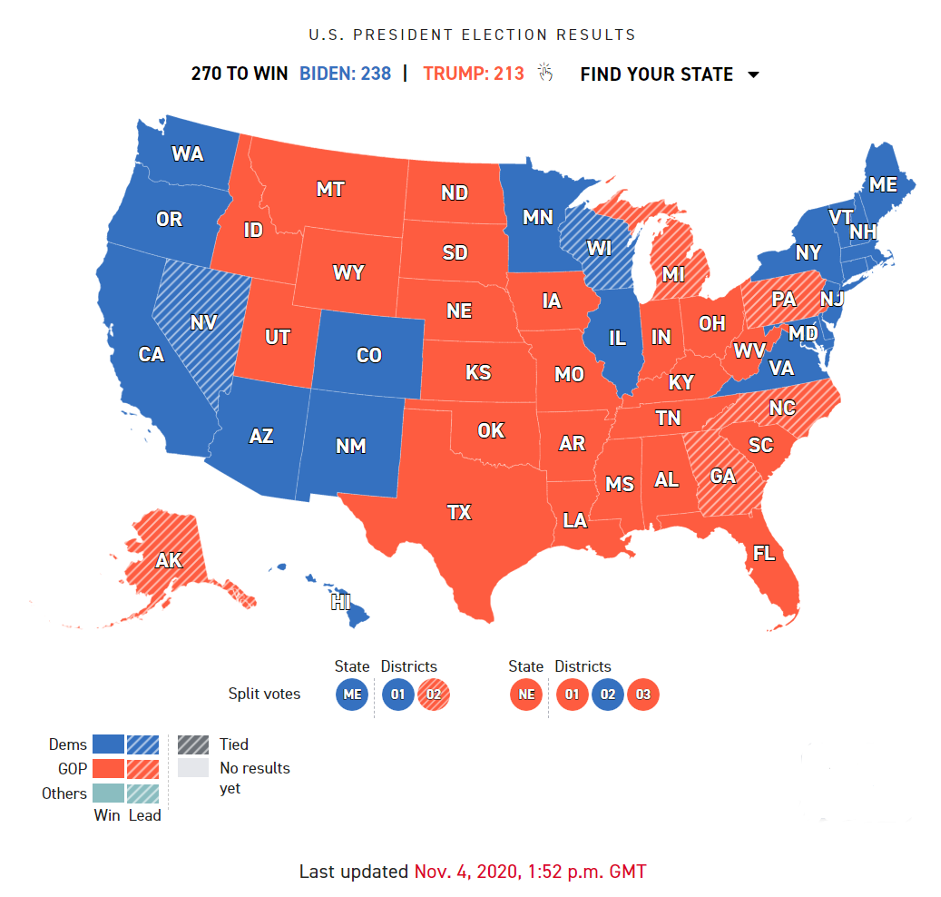 Results from the US election continue to trickle in due to a dramatic increase in mail-in ballots, but it is already clear that predictions of a Democratic landslide were mistaken. Results so far show a far closer race than expected, contrary to market expectations. With the key swing states of Nevada,Wisconsin, and Michigan yet to reveal their tally, it is clear that uncertainty around the result will linger on for some time. This has already affected the‘Blue Wave’ trade, which has unravelled, bringing greater pessimism into the market.

President Trump’s inflammatory suggestion on election night that the election was being stolen, as well as the indication that if Biden does win the presidency, Democrats are unlikely to take hold of the Senate. Volatility around the US political situation is therefore likely to continue for some time.

The Reserve Bank of India is exploring ways of diversifying its reserves, including plans to purchase AAA rated corporate bonds in USD denominations to boost its returns. The broader economic picture from October shows a decline in exports, and growth in imports which has widened the country’s trade deficit for October to $8.8bn, and is $2.7bn larger than the one registered in September. Unsurprisingly oil imports figures have declined by 38.5% YoY, but are in fact slightly higher than in September. Furthermore, the wider Indian economy continues to gather pace as most of the country’s lockdown restrictions have been lifted, with authorities reportedly standing ready to support corporate investments with the next set of stimulus measures.

US small business employment is reportedly being damaged by COVID infections, with the hospitality sector in particular feeling the brunt of this reduction in consumer activity. Support for this sector still hinges on a fiscal stimulus package, which has yet to see any movement from legislators. Discretionary spending will likely soar again when consumers feel safe from the virus, making use of their $1.8trn savings built up since February.

The European Central Bank kept its monetary policy unchanged last week, indicating more significant measures will be introduced in December. Growth figures for Europe’s biggest economies in the third quarter have been relatively strong, particularly in France, Italy and Spain, with more moderate numbers reported in Germany. However, the spate of new lockdown measures will clearly impact the hospitality sector, suggesting there will be a negative impact across Europe for the next quarter.