Markets are riding high on a wave of vaccine-induced enthusiasm. What better time, then, to step back and take a look at what may prove to be the pandemic’s most damaging legacy: a mountain of debt.

Government and household debt levels have both increased sharply since the pandemic began. But in Europe, corporate debt is a cause for particular concern. Companies forced to limit or cease activity during lockdowns have still had to finance their business and partly pay their staff. As a result, corporate borrowing has shot up, helped by state guarantees and central bank stimulus. In the first half of this year alone, euro-area companies issued €400bn of debt – 40% more than was added during the whole of 2019.

The consequences of a huge debt overhang could weigh on European corporates for along time, especially small and mid-sized companies. As debt servicing becomes more difficult, the appetite to invest in capacity and create new jobs will potentially be hampered. The risk of defaults can’t be ignored either. The German Bundesbank is already expecting insolvencies to rise by 35% in the first quarter of 2021. In the face of bonds yielding negative, what are the prospects?

For investors, the answer may be to look East. A third of global GDP is being created in Asia, home to some of the world’s fastest-growing economies. In terms of portfolios, Asian debt remains under-represented, accounting for just 7%of the Barclays Global Aggregate Bond Index, a common benchmark for active funds. At the sovereign level, thanks to prudent fiscal policies, debt growth in Asia is better than in other emerging markets and the developed world. The risk-reward benefit is the highest, too, with Asia’s volatility much less than other emerging markets, notably Latin America.

As Europe digests its debt binge in the months to come, Asian debt will give investors plenty of food for thought. 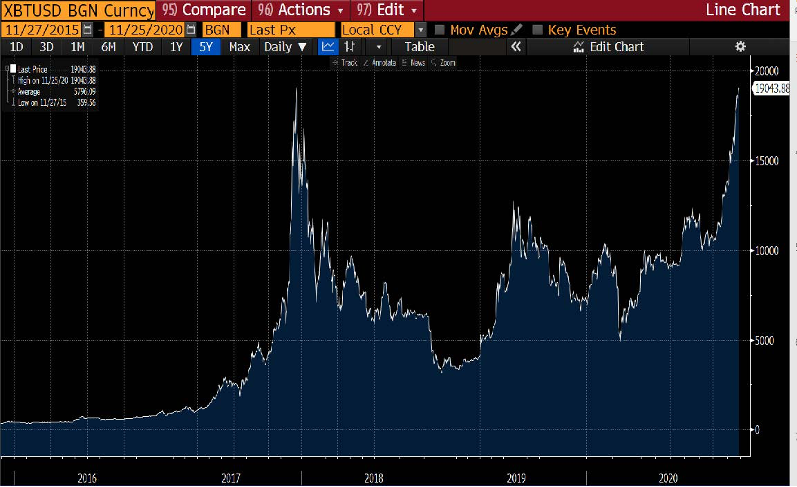 Bitcoin is back. After spending months in the doldrums in the first half of the year, it has generated increasing interest of late. The much-talked-about cryptocurrency has enjoyed a stunning resurgence recently, up 40% month-to-month and reaching a new all-time high. The volume of trades per day now stands 81% greater than for the rest of 2020 combined. Google searches for “Coinbase” (a US-based crypto exchange) also reached their highest level in 12 months. Interestingly, the last time Bitcoin experienced a similar phenomenon was in 2017 at a similar time of year. For those long on Bitcoin, it will indeed again be a ‘Happy Thanksgiving.'

‍
Numbers out of China indicate its industrial production recovery may be running out of steam slightly. October figures showed no change year-on-year fromSeptember (up 6.9%), although they were up 0.8% month-on-month. Production seems to have peaked and is likely losing momentum, as lockdown measures around the world start to bite and consumption weakens. Nevertheless, positive vaccine news means that any blip is expected to be relatively short-lived as labour market conditions around the world normalise. Strong retail sales in China, reflecting concerted government efforts to boost domestic demand, mean there is little to be concerned about.

‍
US consumer confidence fell in November to 96.1 down from 101.4, below the consensus of 98. A decrease was to be expected given the rise of Covid infections around the States, but may have been exacerbated by a sharp decline in consumer confidence among Republican voters in the wake of the US presidential election. With Christmas fast approaching and high hopes for a strong festive period for retailers, confidence should rebound next month.