The social unrest in the U.S. over the last week and the solidarity demonstrations around the world would seem likely to dampen stock prices. But what we’ve seen in recent years is, for better and for worse, a decoupling of stock market performance from social tension.

For instance, when protests in Hong Kong caused the Hang Seng Index to nosedive last year, investors were reacting less to the politics behind the protests and more to the fact that the protests kept tourists away, weakening a major economic driver.

The U.S. tourism market was already underperforming because of the coronavirus, but it accounts for just 2.8 percent of the American economy. A new wave of infections, driven by the thousands of protestors in close quarters, poses a bigger risk for investors than the reasons for protesting. The result? The Dow is up by more than 1200 points since the death of George Floyd, and gained an additional 800 points as the largest mass demonstration in recent memory continued. Similarly, the European markets are holding steady on the announcement of the European Central Bank nearly doubling its coronavirus emergency aid fund, even as thousands of people took to the streets in London, Paris, Amsterdam, and other major cities.

Beyond the protests, there are also nearly 80 million unemployed people across the U.S. and Europe. How quickly governments are able to implement plans that return them to jobs with disposable income will dictate both the speed of the recovery and our collective understanding of how much the pandemic and quarantines changed consumer habits.

One emerging sector where habit change will likely be a boon: cybersecurity. In the U.S. alone, more than $300 billion is spent on IT annually, and the less-fragmented cybersecurity market is projected to grow 20% annually over the next few years, thanks to new regulations mandating better security standards and the upgrades needed during and after the transition to 5G. The sector will also benefit from the increased digitization of daily life, accelerated by the pandemic. 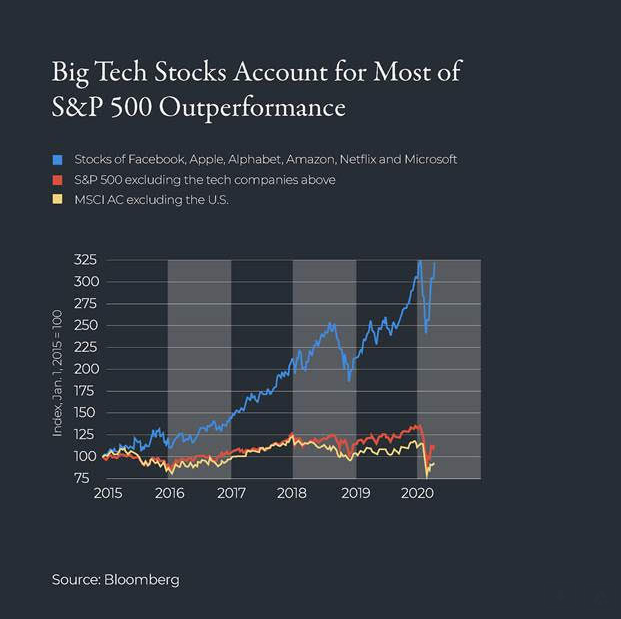 Yes, the S&P 500 is holding steady amid widespread social unrest and the ongoing coronavirus pandemic — but much of that resilience comes from six major tech conglomerates, all of which are largely “corona-proof” in their business model.

How will U.S. consumer spending bounce back?

Lockdown restrictions are easing across the U.S., though that could change if the current wave of protests causes a spike in infections. Even with quarantine restrictions easing, bringing American incomes and their corresponding spending habits back to pre-COVID norms will be challenging without additional household stimulus measures and extended unemployment support. In April, personal income increased by 10.5% and the savings rate increased by 33% — largely because of the $2.6 trillion spent on $1,200 stimulus checks and the $897 billion in unemployment compensation.

Is China opting out of a massive stimulus?

In 2008, China responded to the financial crisis with a $586 billion stimulus package that aided the global economic recovery as well as the one within its borders. Twelve years later, their approach to the pandemic economy is much more constrained, emphasizing continuity over catalyzing growth. The measures taken through monetary policy and credit support are meant to prop up factories and non-financial corporates, allowing the former to get through order backlogs and rebuild inventories. Beyond that, however, China seems unlikely to push for more. The country’s fiscal deficit for 2020 is projected to be 8.5% of GDP, a far cry from the 20% likely for many Western countries.