This week's special focus is on carbon emissions trading: is it a liquid and investable asset class?

In the global fight against climate change, policymakers have long been attracted to ‘cap and trade’ as a market-based solution to address the negative externalities of greenhouse gas emissions. In simplified terms, the mandatory market system works by governments issuing permits that allow companies to emit a certain amount of greenhouse gases. Companies can then buy or sell a unit of exchange – carbon credits – to meet the government-stipulated cap.

The jury is still out on how effective carbon emission trading is in addressing climate change. Estimates suggest the global price of carbon allowances – measured at $24.05 per ton of CO2 by IHS Markit at the start of this year – will need to reach between $50 and $100 per ton of CO2 to achieve the emissions reductions goals of the Paris Agreement. Indeed, no one would dispute that cap and trade is just one small part of the climate action puzzle, and must work in tandem with a suite of other policies.

Emissions trading systems (ETS) are, nonetheless, growing around the world. The EU’s ETS, launched in 2005, is the world’s leading carbon trading system, followed by California’s one and the Regional Greenhouse Gas Initiative (an ETS involving several north-eastern states in theUS). China, the world’s biggest polluter, has run a number of pilots in recent years and in February announced the launch of its own ETS, which will focus on the high-polluting power sector. Other markets, including Thailand and Taiwan, may soon follow suit.

While cap and trade is relatively old news, the emergence of carbon as a liquid and investable asset class in the past 12 months represents a new departure. With carbon prices expected to rise, investors spy an opportunity to hitch their wagons to ETFs which track carbon allowances. The Krane Shares Global Carbon ETF is one example in this nascent market.

This is certainly an evolving field and remains, at this stage, a niche market: the AUM of carbon as an asset class stands at around $50m. It is nevertheless one for long-term investors to keep a close eye on. 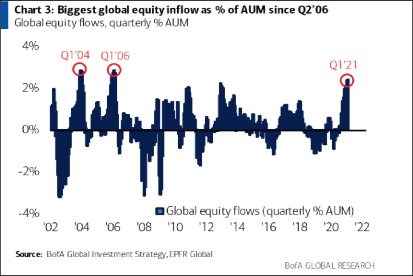 This week is a chart from Bank of America showing how the first quarter of 2021 witnessed the largest inflow into global equity as a share of AUM since 2006. The nervousness seen at the start of the year has disappeared, with investors now piling into equities in anticipation of a robust economic recovery boosted by generous stimulus packages in the UnitedStates and Europe. What is particularly remarkable is the broad base of investor flow: unlike in 2020, when much of the focus rested on tech stocks, we are now also seeing cyclical and value stocks benefit from investor optimism.The rally has lifted the S&P500 past a record level of 4,000 on unusual breadth, with 94.5% of stocks trading above the 200-day moving average – the highest level in 11 years.

The RBI meeting this week resulted in a surprising announcement to apply bond-buying measures to the tune of 1bn Rupees, amid a sharp rise in Covid-19 infections in India. As expected, the policy repo rate remained unchanged at 4%. In a change of rhetoric, the Bank committed to keeping an accommodative policy stance for “as long as necessary” – dropping a timeline of rate rise by Q1 2022. Indian industry showed signs of stalling in February, falling 4.6% YoY, even before the fresh wave of infections hit. Nonetheless, the RBI’s growth forecast for2022 of 10.5% remains optimistic.

Last week’s US labour market report will have made pleasant reading for US policymakers, with non-farm payrolls up 916,000 in March, well above consensus estimates. There were promising signs, in particular, for the hard-hit service sector which added almost 600,000 jobs –half of which was generated by leisure and hospitality. The encouraging rebound caused the unemployment rate to drop to 6% from 6.2% the previous month, but much more progress is required with 11 million fewer people in employment than before the crisis. Elsewhere, manufacturing indicators continue to look strong following the passage of the $1.9tn American Rescue Plan.